Yesterday evening I finally spoke to our beloved Monika, who was wondering how I was… Thank you Monika for carrying me with you 🙂
I realized I was a bit under the radar and I should speak up, on the other hand I was not making or finding time to write a real letter to you conveying how I feel.

Lampedusa was such a strong experience; it has put a lot of other things in perspective. More joy, less worries; more acceptance, less struggle have entered my life…

On the plane I reread a short book written in a difficult language by a survivor of the Mediterranean sea. Before I was at Lampedusa I had difficulty understanding this story, after the journey it seemed much more clear and I could picture the story and understand the emotions.

The morning after I arrived back I befriended the young woman who begs at our church very frequently. Instead of wondering and deciding if I should give her something I spoke to her from the heart. She is called Nicoletta, she is from Romania and comes on Sundays from Brussels by train to beg at our church.

In the days following my homecoming I talked to everybody because everybody wanted to know how it went.
It was not easy. I could share some things with only a few people. But I had these very interesting conversations in which I was offered so many different perspectives and views of the refugee situation, Europe and solidarity. Being open and non-knowing helped to welcome many different offerings.

I tried to tell a part of Vito’s experiences to some friends and family. It touched them.

I read a lot of older and more recent news on Lampedusa and people fleeing on boats, statistics, journalists, economists and commentaries, …
The boat outside Malta sunk and so many drowned again…
I read the letter of the mayor and it touched me deeply (thank you Bridget!), so I read it out loud to my daughters last Saturday when we had this very long interesting conversation on our current world situation (poverty, hunger, war, colonialism…) ;^)

The awareness about Lampedusa also brought the conflicts and war and political and ideological discussions much nearer. For one thing I identify much stronger with the people fleeing their homes.

A friend of mine has a daughter Lore who left from Ghent at the end of August to ride her bike to the south border of Turkey to the refugee camps. Some other young people join her for a part of the way. People donate. It is such a beautiful and courageous thing to do!! I am with her every day.

I was so glad with all the pictures! I didn’t realize there were so many. They brought our moments together back to me in a very alive way. And it helps to tell something about our experience. Thank you for sharing them!

As some of you know and others surely grasped I am a person of doing. So I have been going along through the days, working and caring a lot, doing all sorts of stuff. And in al that Lampedusa and you all have been with me the entire time.
Yesterday after my conversation with Monika I went for a bike ride through the quiet streets of my village. Winds whistling in my ears, I met nobody except one cat who looked at me curiously and a sleeping horse in a field who snorted at me. Around that just: the silence, the smells and the dark sky.
This summer was boundless in its experiences and gifts. And Lampedusa was a jewel. And I realized that the experience of Lampedusa is like a layer under my life at this moment. It has made me appreciate my daily life in a deep way, all the possibilities, the choices, the freedom of thinking and living. That witnessing so much pain can open up a source of joy…

Monika reminded me it will be the 3rd of October tomorrow.
Last week and yesterday again I talked with my little group of young people preparing for confirmation about Peter who, drowning in the sea, lost in chaos, cried out for help and was saved, simultaneously.
In the project here it is just that what we do. These young people that are lost, drowning (we say drenkelingen in Dutch which is a nice word but I cannot translate it) we reach out to them, offer them a hand, so they can pull themselves in from the chaos, it is all we do and it is enough. 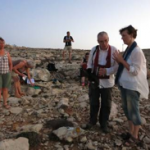 Thank you for walking this inner circle with me.

I Love you all!!
Inge

“In love with him, my soul
lives the subtlest of passions,
lives like a gypsy.
Each day a different house,
each night under the stars.”