A walk through Heden van het slavernijverleden in het Tropenmuseum, by Khaled Salhani

I’ve read about slavery, watched movies and documentaries, but never been in such a direct contact with the stories. Being there was a different experience. I felt the atmosphere changing as I was entering the room. By reading the texts, looking at the photos and standing next to the artifacts, I felt more connected to the people and their stories. That experience touched me really deep.

Standing next to the artifacts makes a big difference
In Heden van het slavernijverleden visitors are confronted with today’s legacies of slavery and colonialism in the Netherlands. Slavery and the personal accounts of the enslaved form a part of a common history shared by black and white – a past that continues to shape and influence Dutch society today. The exhibition is done in collaboration with artists, scientists and descendants of some of the enslaved.

The little boy with a drum
Many stories and photos were on display, but some really got into me. A circular tent was set up on Museumplein in Amsterdam. Visitors stood behind the fences to stare at the 13-years old Maroon boy Johannes Kodjo. No need to say much, the look on the little boy’s face says it all.

Looking at this got me thinking… What would I have done if I was among the spectators? Would I feel okay dehumanizing the boy just because of the color of his skin?
I still ask myself this whenever I remember his face, but unfortunately, don’t seem to find an answer. 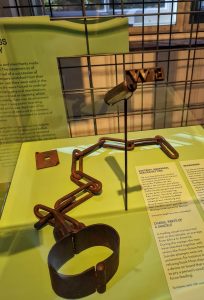 Branding
On slave ships the enslaved were often registered by number rather than by name. These numbers were burned into their skin with a branding iron. The enslaved were seen and treated as commodities with economic value, just like a piece of furniture or any other inanimate thing!
One of the traders describes the moment of branding: “The courtyard stinks of burning flesh and [all around] cries of mortal terror and pain [are to be heard].”
I could almost hear their screams while reading his description and then looking at the branding iron.

Modern slavery
Many of us think that slavery is done, and that this kind of stories we read are a thing of the past, but unfortunately, the reality says otherwise.
Yes, we’re living in the 21st century, but a new type of slavery does exist! Modern slavery has many different forms, some of which are surprisingly blatant. Sex trafficking, forced labor, domestic servitude and forced marriage are examples of some forms of modern slavery. Forced labor for example, is one of the biggest forms of modern slavery.
Many goods enjoyed in rich countries may have murky origins. The United States, Japan and Germany are some of the biggest importers of “at risk” goods, which involves supply chains that are based on modern slavery.

How do we stop it?
There are many ways and levels of fighting modern slavery.
Governments can take actions with policies to prevent sourcing goods and services linked to modern slavery. Thankfully, the Netherlands sits at the top of the list of countries that are taking action against modern slavery.
Another way is to fight it on a personal level. Like educating ourselves, shop fair trade and mobilize our faith-based communities like members of our churches, mosques, synagogues and temples.