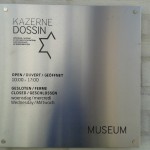 The invitation we had seen already long time ago. Finally Monika and I, Reiner, decided to start the trip both by renting a car to visit the Memorial “Dossin Barracks/Kazerne Dossin) in the Belgian City of Mechelen together with a group of perhaps 40 participants headed by Sensei Frank De Waele from Gent. 25257 Jewish people and 351 Sinti had been deported from there in direction of determination camps (mostly Auschwitz-Birkenau) in the east.

Early at 6 a.m. we started and reached our meeting place, Mechelen Central Station, after about 3 hours. Until 9.30 a.m. more and more participants arrive from entire Begium, from different Sanghas and Zen-Groups, each inspired by the invitation to spend this first Peacemaker’s Open Day together.
In silence the group starts its footpath crossing the City of Mechelen in direction of the former Barracks and the Museum/Memorial, passing the famous and beautiful Cathedral.
We arrive after 40 minutes. Here we meet some other participants, and we start the program of this day as a completed group in the inner courtyard of the former Barracks. There about 70 years ago the people had to stand and wait for their deportation. Guided by Frank Sensei we recite the Peacemaker’s vows for a day of reflection in Flemish Language and stand further there for some minutes in silence around the centered quad. By standing there in silence I start feeling deep inside what must have been happened here during the years of 1942-1944.

Opposite the barracks there is the new Museum, where we meet after in a group room on the 2nd floor. It is built of 4 floors, a basement and an attic to host special exhibitions, very broad and imposing to show the horror of the Nazi-terror in this region. On the exterior walls of the single floors there are shown examples for crimes against Human Rights in our days in the whole world. This context touches me deeply.
It is an almost sacred atmosphere that I feel based on the great design of the building and its admirable structure as a Memorial.

We meet in a classroom in a circle of chairs to have a first chance to speak from our hearts and tell the others where we come from and what is our intention to be here, invited by Frank Sensei and Peacemaker-Friend Dorine (Esser). Parts of the Flemish spoken inputs I’m able to understand and some parts are translated to me by Peacemaker-Friend Patrick van der Hofstad (his wife Anke is translating for Monika), but mostly I feel the intentions behind the words. To me it gives a deeply feeling of being interconnected and close to everyone, and of being truly and warmly welcome here as a descendant of a German Nazi family. And I get an idea of the very different needs and intentions among the participants.

It goes up to noon and we have the chance to visit the exhibition, each in his or her special way and needs. I am impressed and touched by the very detailed descriptions, films and photos, and of the mindfully atmosphere on each floor.
Wandering on floor 2 and 3 I gather impressions that make me recognize what I had felt already at other similar places (like Concentration Camps and Memorials): the absolute perfection of the preparation and implementation of measures and the support of local authorities and sympathizers of the Nazis.

After this time we have a break for Lunch, brought or taken in the Basement-Cafeteria.

Changing the building again we meet in the basement of the Barracks on the other side of the street to be in a room, where 28 cube seats invite us to sit in silence for a time, while we hear voices from lots of ceiling speakers, who are reciting the names of Deported people of the 28 transports, mixed up by many readers. The entire room is filled with spoken names, by male and female voices, and after a short time from my inside I start seeing me on the Auschwitz-Birkenau selection site, reciting names of Murdered. At this point the vicious circle closes! Here in this place the death-trains started and on the selection site of A-B for the most it was the end!

Afterwards we can take the chance to see the exhibition of JAN VANRIET – Gezichtsverlies/Losing face in the light-flooded, bright attic, to let the paintings affect on me. The portraits of Jan Vanriet seem to stare at me in a very fragile way, and it makes me feel guilty in a special way.
At this point the impressive part as a visitor comes to end in this thorough, profound and highly recommended Memorial and Museum, which establishes a reference to Human Rights violations in our days. 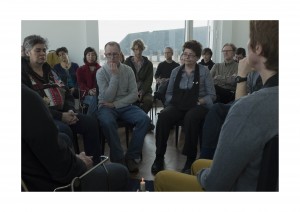 Finally we meet as group in the classroom, where there is a circle of stools is prepared by our wonderful leaders to have a Spiral Council. In the center we find a circle of six chairs for the first round and a candle as well as some talking pieces. The six first in the inner circle are invited bear witness to their experience and feelings after this day, and the others sitting around bear witness by hearing from their hearts. Those who have spoken leave the inner circle after another one has talked from his or her heart and the free place can be taken by another one. So for a certain time the inner circle is always fully seated. For about one and a half hour here is alive what the very different participants, younger and older, Zen-Practitioners or just Interested felt and experienced during this day by talking about it and sharing it with the whole group. Mostly for me there is no need for translation, to me it also shares without verbal understanding what is being said here.

The day finishes at a quarter to 5 p.m.: Thank you so much: Frank De Waele Sensei, Dorine Esser, Petra Hubbeling (who sadly could not attend), Patrick van der Hofstad and Anke, his wife, and all participants and helping hands for their warmly and sincerely welcome. Special thanks to the Museum’s Management for giving such a great support to have this day this way.

Finally by our big joy and surprise we were taken back to the Central Station, where we board our car to go back to Bonn.
Reiner Seido Bonn, 20-03-2014 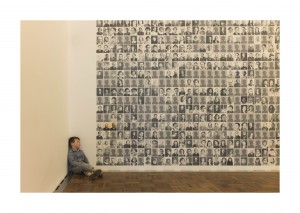