What can one person do?

I’ve long given up the illusion that I can help everybody in this broken world. I was asked today where I draw the line at help and how do I decide who to help? Is there a plan behind my support actions and how not to be overwhelmed at the sheer scale of the problem?

As a volunteer on Lesbos last December, I saw how many volunteers give their all to help as many refugees as possible. Handing out food, distributing clothes and blankets, preparing tea for the masses, or patrolling the shores to look for boats. I did some of that stuff too, but soon decided that in order to put my own skills to good use, I would be better off trying to identify the most vulnerable cases, and providing them with one on one help.

I did organise a lot of mini-information meetings for small groups, by roaming day and night through the camp known as Moria, and providing essential information to people about the registration process, and especially about their onward travel and what to expect, not only on the Balkan route, but also in the countries that they were headed for. I tried to warn them of some of the dangers on route and tried to make sure they had a clearer picture of what asking for asylum actually entails. Due to the lack of translators on the spot, I made tens of calls to friends back in the Netherlands, mainly Arabic speakers, and Dari and Farsi speakers, in order to make sure the groups really understood my message.

At the same time, I knew it was impossible to reach everybody. So I especially kept my eyes open for unaccompanied minors and women travelling alone. Some approached me by chance; others I saw just wandering around the camp.

Boys as young as fourteen or fifteen were travelling alone, and had no notion of the route which lay ahead, nor of the requirements for registration in Greece, let alone in Western Europe. Several had lost all their belongings, including passports and telephones in the sea; others were less fortunate, and stuff had been robbed on the island itself.

As well as providing them with information, I decided to equip those I had met with the stuff they needed to be safe on their journeys ahead. One woman came to me sobbing that her telephone had been stolen; she had no other means to communicate with family members at home, and no money to buy a new telephone. She wanted to call her father, so I gave her my own phone.

It was easy to know what to do. She needed a safe place to sleep, and a telephone with credit so that she could stay in touch on the journey. I took her to the enclosed compound for the most vulnerable cases. It wasn’t much, but at least there were warm units, with lighting and a toilet. A huge improvement on sleeping in an unprotected tent outside, in the freezing cold, on a stony hillside, with no lighting, no heat and no sanitary facilities. I told her I’d meet her in the morning, as she was due to take the ferry to Athens the next day. I bought her a telephone and credit, and gave it to her in the morning. She’s contacted me several times since to say she’s safe and that she arrived at her final destination in Germany.

I did the same for others; young unaccompanied minors, boys, mainly from Afghanistan and Syria. I kept track of them on route, making sure they called me at each new border crossings, to let me know they were safe. I gave my contact details to others too, adults, in case they needed help either en-route or at their destination. Several have been in touch; some just to say thanks, others because they need more information or advice on procedures.

I knew I couldn’t help everyone, so the decision was easy to help just a few, in ways that would really make a difference. No premeditated plan, and no advance decision about who to prioritise and who to give help to and who not. Why those people? Because they walked onto my path and they needed assistance. With some of them I learned about their stories; others I knew nothing about. Asking them to reveal their story wasn’t the goal of my journey; it was even irrelevant. It really was a journey into not-knowing, bearing witness and taking compassionate action where needed. I did what I thought needed to be done at the time. No more and no less. 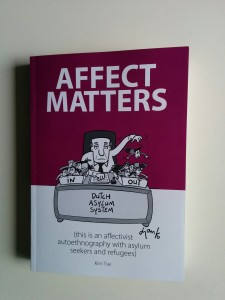 See www.typischkim.nl to download my Phd research: “Affect Matters: this is an affectivist autoethnography with asylum seekers and refugees”